It has already been a great success on Steam, so it’s great to hear that it’s coming to Switch as well. Deadly Days, sees you acting as part of a group of survivors during an ongoing zombie apocalypse. Whilst zombie games have been popular for several years now, the whackiness of Deadly Days, is a welcome change.

There are so many different objects and weapons that are included in the game that can be mixed and matched that it actually feels like a video game version of Shaun of the Dead. The end goal is simple; survive the apocalypse and kill any zombie that comes into your line of sight.

Upon release, the game will be available on the Nintendo eShop. For those wanting to jump into the action just now, it can also be purchased on Steam.

The Steam release has also just had an new update. Version 1.5 of the game has new weapons as well as a new mode that completely randomises the weapons you’ve able to salvage. The 1.5 update also adds in the option to craft new items, which adds an additional layer to the overall strategy of the game. 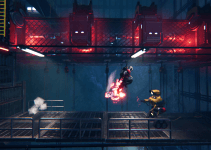