Home
PC
No More Heroes 1 and 2 Are Coming To PC!

Well, it’s been quite a year since I’ve posted anything (nearly a year, in fact). What better way to stage my return than to announce that the mighty No More Heroes 1 and 2 are touching down (see what I did there?) on PC next week.

No More Heroes 1 and 2 were originally released on the Nintendo Wii to huge acclaim and saw the player take Travis Touchdown through a list of assassins in ranked fights in order to become the number 1 assassin in Santa Destroy. The game was subsequently ported over to the Playstation 3, and earlier on this year the Nintendo Switch saw an upscaled 1080p version released.

No More Heroes 1 and 2 will be available on Steam come the 9th June. It’s important to point out that you can’t play this with a keyboard and mouse. Instead, a controller must be used. Whilst the motion controls on the original versions on the Wii were a nice feature, having played both games with a Pro Controller on Switch, the game plays just as well.

Be sure to add this one to your wishlist, it’s one that you won’t want to miss! If you buy it before the 15th June, you’ll get 10% of the list price of the game. The purchase pages can be found here for 1 and here for 2. 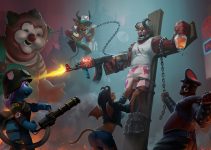