60% keyboards are smaller than their full sized equivalents by omitting various keys. These include the number pad, as well as the arrow keys. The scroll lock, page up and page down keys are sometimes removed from these smaller boards as well.

These usually come in the mechanical variety, with various mechanical switches available from different manufacturers including Cherry.

These can actually be more ergonomically friendly since the span between the keyboard and mouse is reduced, which puts less strain on the shoulders. They are also better suited to those with smaller desks where space is extremely tight.  If anything, it is a cleaner experience, and since they can be cheaper as well, it’s a great option for those that do not need a full sized keyboard with a number pad in it. There are a lot of these available on the market. In order to get around that, listed below are the three best variants that are currently available on the market.

Ducky are renowned for their mechanical keyboards and the One2 Mini is no exception. It is RGB enabled and as such would look great as part of any gaming setup. Of course, it isn’t solely for gamers.  There are a variety of lighting choices available at a push of a button which is great to lighten up any desk.

With a black base and black keycaps, it is visually pleasing. In addition to this, Ducky have opted for various configurations with respect to the available switches. These are all Cherry MX mechanical switches, but there is the option for Brown, Blue, Red and Silent Red. There is also a key cap remover included in the box. This means that should you want to swap them out (to perhaps change the colour of them), then it can easily be done. Whilst the removal tools aren’t overly expensive, it is just a nice touch to have one included in the box.

In addition to this, the USB C cable is removable, which allows for easy replacement should the cable ever become damaged. The keys feel extremely pleasant, even for long typing sessions, and it is one that should be strongly considered.

For those that would prefer to have a wireless 60% keyboard, the Anne Pro 2 is a stellar option. This is by way of Bluetooth, however, it is also possible to use it as a wired keyboard. The battery life is up to 8 hours, so the fact that it can be used with a wired connection over USB C is a nice addition.

Much like the Ducky One2 Mini, this also has RGB functionality. Where is differs though is the variety of switches that the Pro 2 can be configured with. Not only can Cherry MX switches be used, but Kailh and Gateron can also be selected. This gives a real amount of customisation that is hard to knock, and the quality of the keycaps is brilliant.

When typing on this, it is clear that a lot of time and effort was put into the design and construction of the keyboard. It feels extremely sturdy and thanks to the double shot keycaps, they will be able to withstand a lot of punishment over the years.

Included in the box are additional keycaps with different colours on them. This is actually quite a nice addition to the product since it allows further customisation of the keyboard. There is also software included with the keyboard that allows macros to be recorded, in addition to being able to fully customise the lighting effects from it.

Another 60% keyboard that supports Cherry MX Browns, the Pok3r is a brilliant choice for those wanting a robust typing experience. The benefit of the Browns is that whilst they have that great mechanical feel to them, they don’t have the extremely loud clicking noise that comes with MX Blues. Having said that, whilst Brown is the default option, Blues, Red and Silent Reds can be selected instead when buying this.

The backing plate of the Pok3r is made out of strong aluminium, meaning that it will not flex under heavy typing sessions. One thing that I particularly liked about the Pok3r is that it is slightly raised by default. The benefit of this is that legs aren’t needed to prop it up. It can be so infuriating to have these legs drop down under heavy typing sessions. It isn’t a huge angle that the Pok3r is raised by, but it is just noticeable enough to make a comfortable difference. 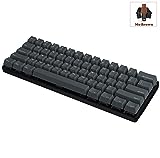