When it comes to PC gaming, an area that is often overlooked is the mousepad. Instead, time is spent on only looking into the mouse and keyboard used instead. However, the mousepad also needs to be considered. It is a blessing and a curse that there are so many of these options available which are focused towards gamers.

This is one of the firm fan favourites, and actually a lot cheaper than some of the non-gaming equivalents out there. Unlike many gaming offerings, this pad doesn’t have any lighting options on it. This isn’t a bad thing, though. Where it earns its gaming stripes is the fact that it has a made of a lightweight, but strong aluminium. Additionally, there are anti slip feet on the pad which means it’ll never move during an intense gaming session. Tied to this is the fact that it’s actually reversible, one side is super smooth, and the other has a bit more texture to it. This allows the player to really have the best of both worlds depending on their needs.

Unlike the MM600, the 800 does have RGB functionality if you are into that kind of thing. The surface is super smooth, which means there is the lowest level of friction possible. This in turns results in an responsive gaming experience since mouse will simply glide across it. This is a perfect setup for any gamer, but especially those into FPS games where speed and precision are absolutely paramount. With respect to the RGB lighting, this is highly customisable and connects via USB. Thankfully, there is also a USB 3.0 pass through system on it, so a port won’t be lost. If there are other Corsair RGB components on the system, then they can be synced up with the pad to ensure an excellent look is obtained.

Personally, I’m a huge fan of large mouse pads that take up a lot of the desk. This allows me to have my keyboard on it as well and protect the finish of the desk. It has the classic black and red ROG styling to it. Despite a lack of RGB, it does gave glow in the dark lettering which is a nice touch. It offers a braided edge, as well as anti slip rubberised bottom, which is extremely important if a keyboard and mouse is on it. For those looking for a huge mouse pad, this is the only choice that needs to be considered. As an added bonus, it is also splash proof should something be spilt onto it. Just keep the liquids away from the setup though, eh?

Rocat are well known for their excellent keyboard and mouse options, so it’s great to see that they have also invested their time in making a gaming mouse pad as well. This is actually larger than a normal sized pad, which is great for those that have more space on offer, or are using a 60% keyboard. It is composed of high quality materials, and it feels really nice to use. The edges of it are also braided with blue stitching which fits perfectly into Rocats colour scheme. It really is able to withstand a fair amount of punishment, also. Rocat have stated that the Taito has a unique and superior surface, when compared to normal cloth pads. The claim is that their surface features an advanced material that has been through a heavy testing period. This sounds like a great excuse for playing far too many games on office time! 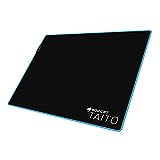 For those that are on a tight budget, the QcK is a brilliant option. It doesn’t have RGB, or any fancy bells and whistles. It also doesn’t have a braided edge to it. However, for the price it’s going for (in many cases less than what a meal from McDonald’s would cost), it’s a great option. It comes in a small and medium sized version, but both do feel great. A nice touch is that it has a rubber base to it, which means that during intense gaming sessions, it shouldn’t slip around the desk. Its low price means that it can also be bought for an office to replace the usual horrible ones that offices are kitted out with. It is also available in a larger size for a minimal increase in price.

Razer products normally fall into two categories price wise; extremely high, and extremely low. The Sphex v2 falls into the latter. It is available in two sizes; regular and small. It doesn’t have any RGB options available, but it has been designed in such a way that it works extremely well for any gaming session. It also has quite an interesting colour scheme on it, with a small Razer logo slap bang in the middle. 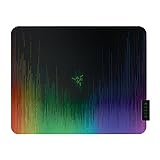 Unlike the Razer Sphex, the Goliathus  does have RGB functionality. It connects to the PC by way of USB connection. It feels really nice and satisfying running a mouse over it, and there was minimal slipping taking place. It’s a tad bigger than some of the other options on this list, so if there’s space on the desk for it, it’s a solid choice.  The material that it is composed of also means that it’s highly versatile regardless of the DPI that is used.