A PC overheating is actually pretty common during the life of a PC. There are quite a few reasons for this. It can be down to the fans becoming older, as well as dirt getting into the system. To monitor the temperature inside the system, this can be done by way of the sensors on the motherboard. Likewise, for the GPU and CPU, their temperatures can be monitored by using GPU-Z and CPU-Z respectively.

The first is the fact that the fans on the PC have now reached the end of their working life. Over time, the fans will become a lot less efficient, and due to this they won’t be able to circulate the air as well as they previously could. When it comes to getting new case fans, it’s important to invest in high quality ones. Cheaper ones can be purchased, but they don’t generally last as long. The end result of this is that they need to be replaced sooner, thereby causing a false economy.

Thankfully, several high quality case fan suppliers are available. From personal experience, BeQuiet offer excellent fans at a modest price point. One thing that I hate about older systems is the fact that the fans on them are really noisy. In PC builds I’ve done for myself and also for other, I’ve always used the BeQuiet fans since they are pretty quiet.

There is a small increase in price over a non-silent fan, but in my opinion it is worth it. What I like about the SilentWings3 is that it has Pulse Width Modulation technology in it. For those not in the know, it means that a custom fan curve can be set up with the fans. This is in comparison to it running at the same speed, all of the time. Not only is the wasteful in terms of the energy consumed, it also put more wear and tear on the fans. Altering the fan speed is done either in the BIOS, or via software in Windows.

The size of the fan needed can vary between case types. The best way to ensure that the right fan is purchased is to swap out the old fan with a new one of the same size.

Upon installation of the new fans, it is important to make sure that there is adequate airflow for the fans. This is so that air can get into the case and then expelled back out of it again. 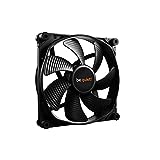 Cleaning inside the case

This will sound strange to some, but it’s extremely important to clean the inside of the case. For starters, never vacuum inside the PC. This is a sure fire way to cause damage to it. This is due to the fact that the suction on the vacuum can cause surface mounted components to be damaged. Similarly, damage will occur to the cables when sucked up by the vacuum cleaner.

Compressed air is used instead to blow away any dirt out of the system. When there is a significant amount of dirt on the fans or on the motherboard, they should be removed from the system and blown out that way. Water must not be used to clean the components.

In addition to this, move the PC away from any areas that are dirty since over time dirt will infiltrate the system again.

Invest in a new CPU cooler

There are instances where the cooler in the box with the CPU is sufficient enough to cool the CPU. When the CPU is being pushed to its limit though, the cooler can be overwhelmed. To get around this issue, a third party cooler is a better option. The size of the PC case will dictate what kind of cooler is used. For a small form factor build, low profile coolers are required. More information about these can be found here.

In the case of a silent CPU cooler, the Bequiet Dark Rock Pro 4 is the ultimate way to keep the CPU cool. It does run at a premium price, however, An alternative to using this will still keeping the CPU cooling silent is to use an All In One CPU Cooler. These contain liquid in them to keep the CPU cool at all times. They are a much better option than an open loop water cooling system. The reason for this is that the latter requires extensive maintenance. When it comes to an all in one cooler, there is no need to carry out maintenance on it. They are generally more expensive though than conventional air CPU coolers, so this is something that needs to be considered before purchasing. You will also need to measure inside your case to see if you can fit the radiator into your case. Having said that, the Corsair iCUE H115i is an all in one cooler I have had excellent success with.

Replace the thermal paste on the CPU

I’ve discussed elsewhere what the best thermal paste is, and you can read more about it here. To keep it brief, over time the thermal paste will start to lose its ability to transfer heat from the CPU to the cooler. When that happens, the CPU you will overheat. Thermal paste is relatively inexpensive and is a great way to stop the CPU from overheating.