We’ve previously discussed the use of All in One Water coolers. These are a great and easy way to liquid cool your PC. However, perhaps it’s the fact that you want to use a fan setup instead. Depending on the size of your PC case, the choice of CPU cooler that you use can be pretty important. If you want to build a Mini ITX PC, then the case that you’re using is already going to be pretty small. Due to this, you’ll more than likely want to use a low profile CPU cooler.

There are a lot on the market to suit your needs, some of which are better than others. What though are the best low profile CPU coolers that you can get?

Noctua are synonymous with excellent cooling fans and thermal paste. We have previously covered the excellent NT-H1 thermal compound. With regards to the NH-L12S, they’ve really raised the bar when it comes to small form factor PC cooling.  The cooler itself is only 70mm tall. The benefit of this is that you will have more than enough clearance inside your mini ITX case. A handy feature of this is that you are also able to switch around the position of the fan. You can have it underneath the cooling fins, or on top of them. The benefit of doing so is that by placing the fan on top of the fins, it’ll give you a bit more clearance for your system RAM (if needed).

Speaking of fans, one comes included in the box. This is a Noctua 120mm fan compared to the 92mm that was given on the previous model. The fan itself is of the PWM variety. The benefit of this is that you are able to adjust the fan speed depending on the load that the system is under.

This really is a complete all in one low profile cooler package with the addition of Noctua NT-H1 thermal paste in the box. This is great value for money since you’re getting three products for such a low price point.

Speaking of value, this cooler comes with Noctuas proprietary mounting system, SecuFirm2. What this means for you is that you can use it on a wide variety of socket types from both AMD and Intel, including the latest generation AM4 platform. It doesn’t however support Threadripper. Having said that, you wouldn’t want to use that CPU in a mini ITX build, anyway.

One point to be aware of though is the overclocking ability of this cooler. Generally not many people would want to overclock a mini ITX build anyway, although it should be noted that Noctua recommend that you do not use this cooler to do so.

Be Quiet are well known for their excellent products which severely limit the amount of noise you hear from your PC. The BK002 is no exception to this rule. The low profile design of this means that you can easily fit it inside even the smallest of cases. It achieves its fantastic cooling thanks to the addition of 8 copper heatpipes (4 on each side).

The fan itself is of the 120mm and PWM variety. There are 9 blades in the fan and designed in such a way to maximise cooling but severely limit the noise from it.

In terms of cooling power, the BK002 is able to cool CPUs up to 130W TDP. This means that if you have an i7 that you’d like to overclock, this won’t be a problem when it comes to cooling it. In addition, it is compatible with a lot of both Intel and AMD chip sets. This includes the ever popular AM4 socket set for Ryzen processors. In terms of the temperatures you can expect to get, one user had a maximum temperature of 74°C on their 6700K. The clock speed was 4.6GHz. This is nothing short of exceptional on such a small cooler. Thermal paste isn’t included with this kit, but you can read about the best ones over here. 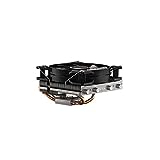 Scythe have created a fantastic cooler in the Shuriken 3. With regards to heat transfer, the contact plate has 10 copper heat pipes attached to it (5 on each side). This is an ideal way to transfer heat away from your processor and towards the fan and cooling fins. It is also incredibly compact with the total height being 60mm.

As with the other options mentioned here, the included fan is of the PWM variety. The fan is of the 120mm variety which is a great way to ensure that the chip remains cool in your small PC case. Height wise, it comes in at a slim 68mm meaning that it’s perfect for an small form factor build.

With respect to its compatibility, it supports a wide variety of AMD and Intel sockets. When compared to the previous model, the 3 also supports the AM4 platform. Therefore, you’ll be able to use Ryzen CPUs with this cooler.

Thermaltakes offering of a low profile cooler is a curious one. Unlike the Noctua whereby the cooler and the fan sits one on top of the other, this isn’t the case with the Engine 27. Instead, the fan itself sits inside the cooler. That’s a pretty unique concept, and not something that other brands are doing.

However, it works extremely well! Due to the unique structure, the total height is just 27mm. That means that no matter how small your case is, you’re getting plenty of room around the cooler for the heat to dissipate. The fan itself is of the 60mm variety which may sound pretty small. However, when you consider the fact that the fan has 40 blades on it, it’s clear that this can really help to keep your CPU cool. The large number of these blades and the spacing between them lets the air flow in such a way that it remains as quiet as possible during operation. Of course, it is able to utilise PWM which means that the fan speed can be adjusted depending on the load it’s under.

In terms of downsides, this isn’t suitable for AMD sockets, with it only working with Intel CPUs. Also, it will only support the cooling of CPUs up to 70W, so if you have a high power chip, this might not be the best option to keep it within optimal temperatures. As an added bonus, thermal paste is already present on the unit.