Fans have been waiting years for another Streets of Rage game. The franchise became wildly popular on the Sega Mega Drive (Genesis for those in the US). It was a great seller for the system, and a franchise that Super Nintendo owners wished they had on their system.

The game has been lovingly made by Lizard Cube, Dotemu and also Guard Crush Games. It’s a faithful sequel (forthquel?) and it looks bloody amazing. For anyone that enjoys sidescrolling combat, this is the game for you. The music is also on point, and it is quintessentially nineties. 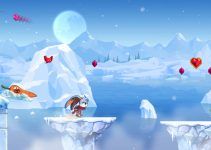