ATX cases are a brilliant option for those that want to take full advantage of full sized ATX motherboards. However, despite these being the biggest motherboards available, it is actually possible to get small ATX cases. This really gives the best of both worlds; a small overall footprint in a bedroom or office, but with the full functionality of the biggest sized motherboard available.

Even better, there are so many diffent choices available. To make things easier with it comes to picking the correct one, we’ve collated a list of the best, smallest ATX cases on the market.

When first looking at it, the HAF from Cooler Master is actually mistaken for an ITX Case! Whilst it is possible to use an ITX motherboard on this system, the HAF actually does support an ATX motherboard. The system itself is split across two levels, with the motherboard and GPU sitting on the top, and the power supply and storage devices stored on the bottom. Speaking of the GPU, the longest length it supports is 334mm and when it comes to CPU cooler height, the maximum supported height is 180mm.

Since it is a slightly older case, there is also the addition of two optical drive bays. Personally, I still like to have a PC that has the ability to play CDs and DVDs, especially for older games, so having two drive slots is a great feature. Speaking of storage, there are also four 3.5” inch drive bays on the system, two of which can be remove from the front of the case. These can also be quickly converted to accommodate 2.5” drives instead by using the appropriate cage.

Since it is a smaller case when compared to a full sized tower, cooling should always be considered. Thankfully, Cooler Master have included two of their 120mm Xtraflow fans and are pre-installed at the front of the cage. There are also vents on the left and right hand side of the case, as well as a massive mesh top which allows a 200mm to be mounted. This means that the hot air inside the case can easily be extracted from the system.

A nice bonus is the fact that there are two handles on the case which means that moving the system around is extremely easy. Connectivity wise, there are two USB 3.0 ports on the front of the case

Corsair is well known for their excellent PC components, and the Air 540 is no exception to the rule. Much like the HAF XB EVO listed above, it is a dual chamber setup, with the motherboard and GPU residing in one chamber and the power supply residing in the second chamber. This means that the air flow inside the system can be maximised. Speaking of air flow, there is also a fan filter pre-included in the case meaning that dust entry is kept to a minimum. Also, there are two 120mm Corsair fans included with the case to get you started.  With respect to CPU cooling, the maximum support height is 170mm. Likewise; the longest supported GPU length is 320mm. There is also the option to mount an AIO cooler with a maximum length of 280mm on the top of the case. Alternatively, a 360mm radiator can be mounted on the front of the case.

Cable management is also a breeze (heh) in this system thanks to its dual chamber design. It has rubber grommets included in the chassis which allows cables to be easily squirreled away. This case also supports two optical drives which is a great bonus. There are also 4 SSD slots available, with the option to convert the remaining two SSD drive bays into 3.5” bays to support HDDSs. To really add a level of finesse to the system the side panel is windowed which allows users to show off their cool interior.

There are also 2 USB 3.0 ports on the front of the system for added connectivity.

The H500i is a brilliant looking small ATX case which is great at showing off a completed build thanks its side panel that is actually a window. The window is made from tempered glass. Tied to this is the inclusion of two RGB strips to really show off the components in the case.  Added to this is the fact that the GPU can be mounted vertically, so that you can really show off your GPU in style.

Unlike the other two cases listed above, this ATX chassis doesn’t have the option to install an optical drive in it, which may be a deal breaker for some. However, it does support two 3.5” HDDs and two 2.5” SSDs.

As with the two cases listed above though, the PSU is kept within a separate chamber in the case. To help promote air from the PSU being expelled from the system, the case comes pre-installed with feet on it, which also raises the overall height of the PC.

It also sports one USB Type C port and  one USB 3.1 port at the front of the case which is a great little performance boost for compatible devices.

It is available in a variety of colours, but personally, the white is a favourite. An added bonus is the fact that there are two 120mm fans included with the case. There are also a few fan filters in the case as well to ensure that the system is kept nice and clean.  Since cooling is paramount in any case, there is also support for radiators should water cooling be the cooling method of choice. Two 120mm or 140mm fans on a radiator can be mounted at the front, and one 120mm fan radiator can be mounted on the back of the case. 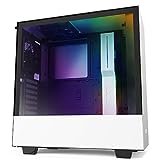