Home
PC
Paperball Is Making Its Way To Steam

Cast your mind back to the early 2000s. There was one game in particular for the launch of the GameCube that gamers today still love. That game was Super Monkey Ball. Over the years, various Super Monkey Ball games have been released. However, these didn’t capture the magic the same way the first two games in the series did.

Fast forward to today and we’re on the countdown to the release of Paperball. This is really the spiritual successor to Super Monkey Ball. It has the same visual appeal as the games that came before it, but it still looks new and fresh.

The game will have 150 levels, ranging from novice courses all the way up to the challenge we really crave. What I like about this is that it’ll have local multiplayer, something which seems to be a bit of an afterthought these days.

Paperball will be released on 27th March on Steam. 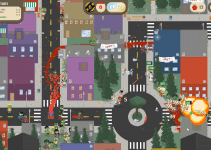