So Saints Row the Third has now been released on Nintendo Switch. Unfortunately though, it has been riddled with problems and 11 days after the games release, for many it is still an unplayable mess.

For the majority of users, its the stuttering of the game both in docked and portable mode, as well as the severe amount of lag when using the Pro Controller. For a full price retail game, this is unacceptable. There is no way that this game should have been released in its current state. Having played it myself, I was so frustrated that I returned the game to Amazon for a full refund. Amazon were actually really good about this and felt that the game shouldn’t have been released either since it is a laggy mess.

Aside from the lag, the sheer amount of strange bugs that have happening is also an issue. This isn’t a new game, but rather a port. It should have been extremely smooth and yet that isn’t the case. What really pissed me off yesterday though was an advert on YouTube touting the game. In the trailer, they have used PC and Xbox 360 footage (going on the basis that there’s an ESC prompt on one of the menus, as well as buttons) which in itself should be classed as false advertising since the perfomance on these platforms is much, much better than that on the Nintendo Switch version.

This isn’t the first time either that this has happened on Nintendo Switch. WWE 2K18 suffered a similar problem, and given that numerous updates later and the game is still an unplayable mess, I don’t have much hope for Saints Row 3 doing much better. There is the argument that WWE 2K18 was a current gen game, whereas SR3 is from a previous generation.

It really is disappointing that Deep Silver have duped the public like this, and it really shouldn’t be tolerated. People spend their hard earned cash on these games, and they don’t deserve to be ripped off with sub standard ports that quite clearly hadn’t been tested before being released to the masses.

If you want to play the game with all the DLC, it’s available on Humble Bundle for the same price. Saints Row IV is also included (along with its DLC) as is Saints Row 2. This is a much better option than the mess that Deep Silver have pushed out on Nintendo Switch. 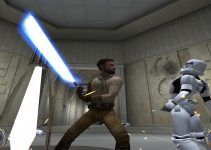